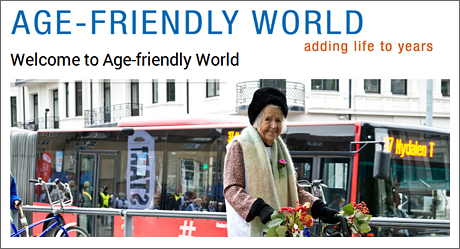 PIVOT Dublin were delighted to have Dr David Robinson and other people in various fields of expertise as Guest Curators of our blog in April 2013. These posts share insights into how we can discover new approaches to meeting the challenges and opportunities that an ageing society brings.

The streets, roads, squares or parks that make up the public realm of our cities, towns and villages provide the stage for people to walk, cycle, drive or take public transport to work or school, to go about their business, to mingle with friends or strangers, to play, to exercise, or simply to sit and watch people and the world go by. Through density, proximity and mixed uses, urban areas have the potential to support vibrant and sustainable communities while hosting the necessary diversity, critical mass and human interaction to spark and sustain innovation, employment, sport culture and the arts.

However, in many urban areas the potential for this people friendly environment has not been fulfilled and according to Gehl “The same pattern appears everywhere, namely that for the past 50 years, the human dimension has been seriously neglected in connection with urban development” If the human dimension has been neglected in urban areas, then it could be argued that the needs of older people have been all but completely ignored.

Burton and Mitchell argue that “The built environment has traditionally been built with the average young, healthy male in mind… Until the design of the built environment takes into account the diverse needs of users, many people will be restricted or excluded from the outside world” They argue that many people who are frail or living with dementia will effectively be trapped in their own home if streets are not designed to cater to their needs.

Where possible older people frequently go out into their local community regardless of the season and walking is the predominant form of transport. While activities of daily living are an obvious reason for travelling out into the community, research shows that, socialising, getting physical exercise and fresh air and contact with nature, are often the main drivers. While the quality of the built environment is critical to the creation of accessible, safe and healthy streets for older people to complete their necessary activities, it is fundamental to their social, physical and mental well-being in terms of providing a supportive environment to interact safely and comfortably with their community.

Urban design using concepts such as shared space design or Universal Design at the urban scale seek to create a more equitable cities for all users while initiatives such as age friendly cities or age friendly counties focus on environments that support healthy ageing. However this is barely a start and whatever about the social obligation inherent in creating age friendly environments, there is also the economic and health benefits associated with keeping older people active and continually involved in society as a valuable human resource.

In what Pierce calls ‘The Century of the City’ any disregard of older people’s needs in urban areas will be compounded if projections for 2050 are correct – a global population exceeding 9 billion, over 6.4 billion living in cities, an ageing global population with 20% of people over sixty and approximately 80% of these living in cities. If the streets, roads, squares and parks of our cities, towns and villages are not fully serving older people now, this will become even more critical in the future if things remain the same. Tom Grey and Mark Dyer – TrinityHaus, Trinity College Dublin www.trinityhaus.tcd.ie